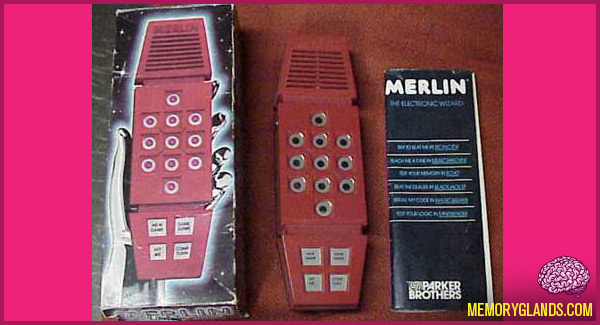 Merlin (sometimes known as Merlin, the Electronic Wizard) was a handheld electronic game first made by Parker Brothers in 1978. Merlin is notable as one of the earliest and most popular handheld games, selling over 5 million units during its initial run, as well as one of the most long-lived, remaining popular throughout the 1980s. A version of the game has been recently re-released by the Milton Bradley Company.

Merlin’s simple array of buttons and lights supported play of six different games, some of which could be played against the computer or against another person. Here is the list of games that could be selected:
Tic Tac Toe, Music Machine, Echo (a game similar to Simon), Blackjack 13, Magic Square (a pattern game similar to Lights Out), and Mindbender (a game similar to Mastermind).