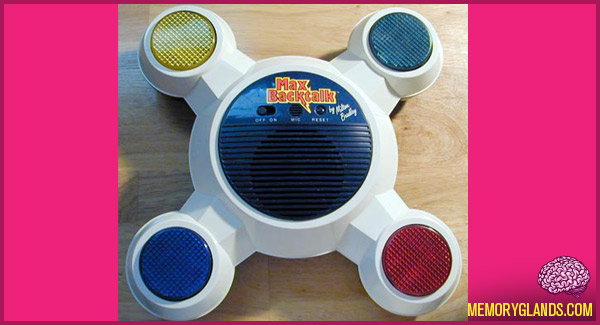 Released in 1986, Max Backtalk is an electronic memory/reaction game that uses the player’s own voices. To begin, each player sits by a colored button and speaks a word into the microphone. The game starts by Max flashing a player’s light and repeating that player’s word. The player scores a point by quickly pressing his or her button. If your reaction time is too slow you lose a point. Max then calls another player’s word and so on. Be careful – Max can also bluff by calling one player’s word and lighting another player’s light. Any player that reacts would then lose a point. The longer you play, the faster the words are spoken and the lenses light. The player with the most points at the end is the winner. An elimination version, and a simple memory game (ala Simon) can also be played.