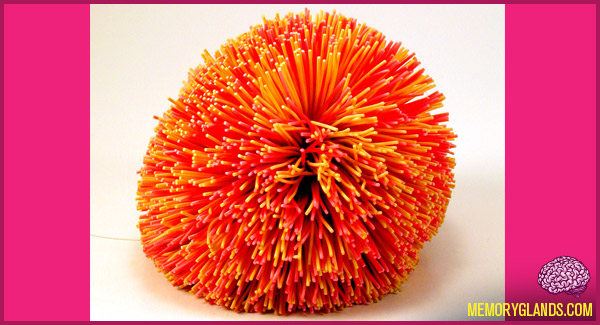 The Koosh Ball is a toy ball made of rubber filaments (strings) attached to a soft rubber core. It was developed in 1986 by Scott Stillinger to be easy for his 5-year old daughter and 8-year old son to hold and throw, and was named after the sound it made when it landed. Stillinger started OddzOn Products Inc. with his brother-in-law, Mark Button, who had previously been a marketing manager for Mattel, in 1987 in order to market it. The Koosh ball was one of 1988’s hot Christmas toys. The company later expanded their product line to include 50 other Koosh-related products, including keyrings, baseball sets, and yo-yos. The number of Koosh Balls sold is estimated to be in the millions.

The ball consists of approximately 2,000 natural rubber filaments, and has been released in a variety of color combinations. A variation was the Koosh Kins line, of Koosh balls with cartooney faces and hands. Koosh Kins was made into a comic book mini-series by Archie Comics, where they kept their cartoon-like appearance.