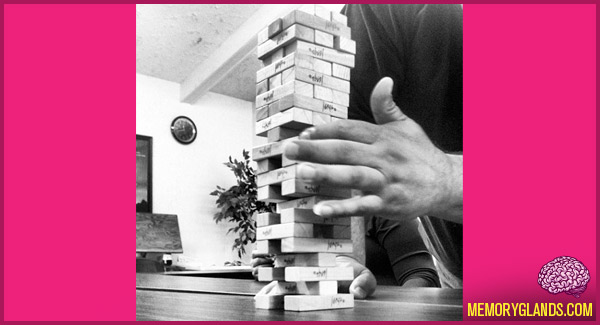 Jenga is a game of physical and mental skill created by Leslie Scott, and currently marketed by Parker Brothers, a division of Hasbro. During the game, players take turns to remove a block from a tower and balance it on top, creating a taller and increasingly unstable structure as the game progresses.

Jenga was created by Leslie Scott, the co-founder of Oxford Games Ltd, based on a game that evolved within her family in the early 1970s using children’s wood building blocks the family purchased from a sawmill in Takoradi, Ghana. Though a British national, Scott was born in East Africa, where she was raised speaking English and Swahili, before moving to live in Ghana, West Africa. Scott launched the game she named and trademarked as ‘Jenga’ at the London Toy Fair in January 1983 and sold it through her own company, Leslie Scott Associates. The blocks of the first sets of Jenga were manufactured for Scott by the Camphill Village Trust in Botton, Yorkshire. The V&A Museum of Childhood has exhibited one of the original sets of Jenga since 1982.

In 1984, Robert Grebler, an entrepreneur from California who was the brother of a close friend of Scott, contacted her and expressed interest in importing and distributing Jenga in Canada. In April 1985, Grebler acquired from Scott the exclusive rights to Jenga for the U.S. and Canada, and then in October that year, Scott assigned the worldwide rights in Jenga to Grebler, which he in turn assigned to Pokonobe Associates. Convinced of Jenga’s potential, Grebler had invited two cousins to form Pokonobe Associates with him in 1985 to increase distribution of Jenga. Pokonobe then licensed Irwin Toy to sell Jenga in Canada and to be master licensees worldwide. Irwin Toy licensed Jenga to Schaper in the U.S. and when that company was bought by Hasbro, Jenga was launched under the Milton Bradley banner. Eventually, Hasbro became licensee in most countries around the world.

Today, according to Leslie Scott, over 50 million Jenga games, equivalent to more than 2.7 billion Jenga blocks, have been sold worldwide.

Fun fact: Jenga is derived from a Swahili word meaning “to build.”