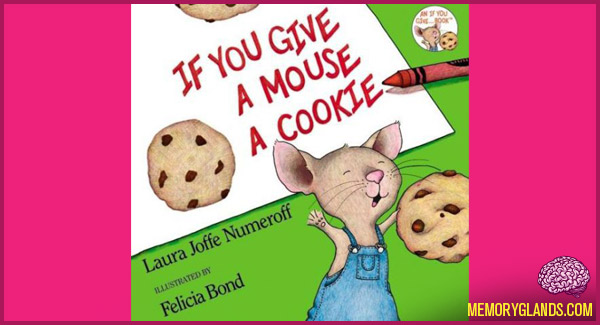 If You Give a Mouse a Cookie is a children’s book written by Laura Numeroff and illustrated by Felicia Bond. Described as a “circular tale,” it is Numeroff and Bond’s first collaboration in what came to be the If You Give… Book™ series.

The book is known for its playful, circular pattern. A boy gives a cookie to a mouse. The mouse asks for a glass of milk. He then requests a straw (to drink the milk), a mirror (to avoid a milk mustache), nail scissors (to trim his hair), and a broom (to sweep up). Next he wants to take a nap, to have a story read to him, to draw a picture, and to hang the drawing on the refrigerator. Looking at the refrigerator makes him thirsty, so he asks for a glass of milk. The circle is complete when he wants a cookie to go with it.

Author Laura Numeroff has often said in interviews that the idea for the story came to her during a long car trip she took with a friend from San Francisco to Oregon. She narrated it as they drove and later wrote it down. The manuscript was passed over by nine publishers before being taken on by Laura Gerringer, a publisher under the Harper and Row (now HarperCollins) imprint, who immediately thought of Felicia Bond to illustrate it.