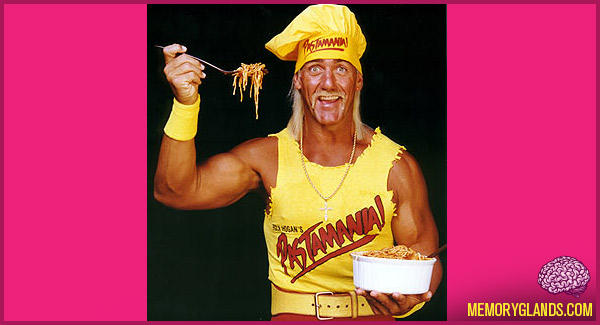 Hulk Hogan’s Pastamania was a restaurant in the Mall of America in Bloomington, Minnesota. It was created and financed by Hogan. It opened on the Labor Day weekend of 1995 and was later heavily hyped on World Championship Wrestling’s live flagship show WCW Monday Nitro, which actually premiered that September from the mall. The restaurant, which remained in operation for less than a year, featured such dishes as “Hulk-U’s” and “Hulk-A-Roos”.

Unrelated but hilarious: In an interview on both the Tonight Show and Late Night with Conan O’Brien, Bollea claimed that the George Foreman Grill was originally offered to him, but he failed to respond in time. George Foreman was called and he chose to endorse the grill instead of a blender which became the Hulk Hogan Thunder Mixer.