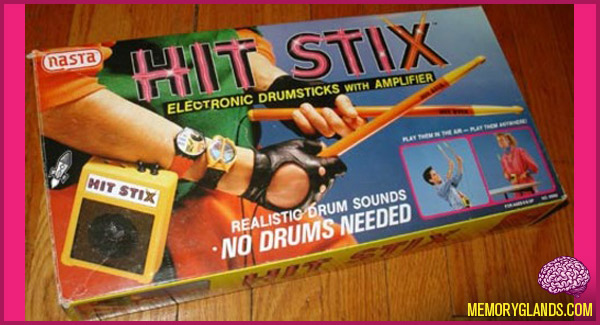 Hit Stix is a toy electronic musical instrument manufactured by Nasta and Radio Shack in the 1980s. A set of Hit Stix consists of 2 drum sticks which are teathered to a small amplifier by audio cables. When the drum sticks are thrust forward in mid air, mimicking actual drum playing, a snare drum sound effect is produced. A rapid succession of thrusts produces a drum roll. Like air guitar is played without a real guitar, Hit Stix are played without any real drums. It is a common misconception that Hit Stix are meant to be hit against another surface. In fact, the sounds are produced simply by the motion of drumming and do not need to come in contact with any surface in order to produce a sound. Hit Stix is succeeded by Hit Stix 2, which incorporates sound selection via sliders on each drum stick. The left stick adjusts the tone while the right selects either snare, tom, bass drum or phaser. Both incarnations feature a yellow and orange color scheme and a belt clip which allows the drummer to wear the amplifier on his or her hip. The amplifier requires one 9-volt battery and has a wheel for volume control.