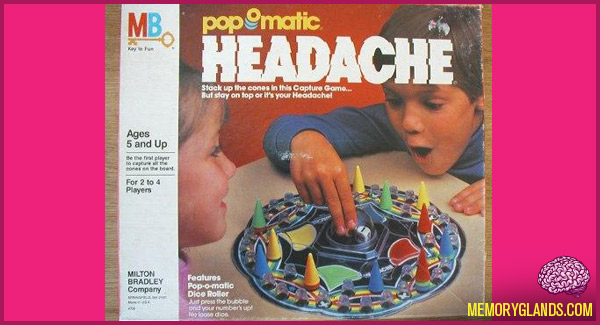 Headache is a board game similar to Trouble in which the object is to land a playing piece on top of all opponents’ pieces (known as “cones”). The game is distinct from Trouble in that there is no finish the player must reach. Play moves in circles, until only one player has cones remaining on the board, being declared the winner. All players are welcome to occupy any space throughout the game, provided die roll allows, and there are eight spaces that serve as “safe” spots, where a cone resting on this space cannot be captured. Captured pieces are not sent back to start, but are permanently lost.

Like Trouble, Headache has its dice in a Pop-o-matic bubble in the center of the board. The bubble is pressed to roll the dice. But unlike Trouble, which has a single die in the bubble, Headache has two dice. One die is a regular die featuring the numbers one through six. The other is blank on five sides, and has a red dot on the sixth side. The red dot, if rolled allows for an extra turn.

Headache was first introduced in 1968 by the Kohner Brothers. It is currently manufactured by Milton Bradley.