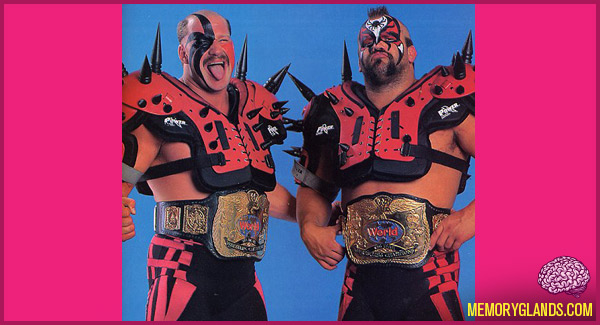 The Road Warriors were a professional wrestling tag team originally composed of Michael “Hawk” Hegstrand and Joseph “Animal” Laurinaitis, though other members were added later on in their career. They performed under the name “Road Warriors” in the American Wrestling Association, the National Wrestling Alliance, and World Championship Wrestling, and the name Legion of Doom (L.O.D. for short) in the World Wrestling Federation. Under either name, their gimmick was the same – two imposing musclebound wrestlers in face paint.

Generally recognized as one of the greatest tag teams in professional wrestling history, Hawk and Animal were well known as innovators, popularizing the use of face paint, using their massive physiques and power moves to win over audiences, and introducing a tandem maneuver known as the Doomsday Device. Both men used the move as a team finisher throughout their careers, even when teaming with other partners.