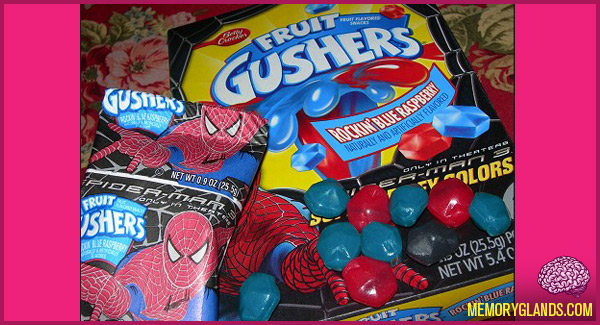 Fruit gushers (occasionally just called Gushers) are hexagon-shaped snacks made from fruit, sugar, and/or other natural and artificial flavors and colors. Gushers, like many other varieties of fruit snacks, are high in vitamin C and are low fat, but are high in sugar. The center of each gusher is a thick sweetened liquid made from fruit juice and concentrated pears, and is surrounded by a chewy gelatinous sugar covering. When one bites into the snack, the liquid inside gushes out, hence the name of the snack.

Gushers originally came in two flavors: Gushin’ Grape and Strawberry Splash. Later, grape was discontinued, although there is a movement among consumers to have it brought back. Gushers now come in a variety of flavors, including: Tropical Flavors, Watermelon Blast, Strawberry Splash, Screamin’ Green Apple, Triple Berry Shock, Rockin’ Blue Raspberry, Fruitomic Punch, G Force Berry Radical, Xtreme Kiwi Xplosion, Tropical, Passion Berry Punch, Double Dare Berry and Roboberry Ultra Blast. Now there are also mood gushers. There are also variety packs: the traditional Variety Pack, which contains all of the flavors mentioned above. The most recent addition to the Gusher family is the “Mystery Flavor.” Stores such as Sams Club and Wal-Mart, plus associates, carry Gushers in bulk.