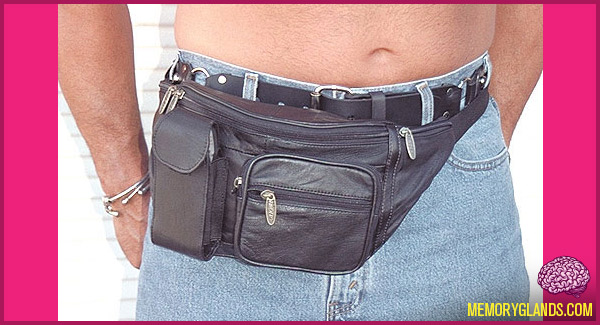 The name “fanny pack” is derived from the fact that they were traditionally worn facing the rear above the buttocks, for which fanny is a slang term in America. Despite the name, many do not wear fanny packs on their rear because they are easier to pick pocket and harder to access. In the United Kingdom and Anglophone Oceania, the term “bum bag” or “belt bag” is used, since the word “fanny” means vulva, rather than buttocks, in those countries.

Fanny packs reached the peak of their popularity in the late 1980s and early- to mid-1990s. Today, however, fanny packs are considered unfashionable in some countries. “Weird Al” Yankovic, for instance, associates the wearing of fanny packs in his song “White & Nerdy.” Many consider the fanny pack a sure mark for an out-of-place tourist, invoking the traditional tourist stereotypes known around the world, also commonly worn by old people to carry their medicine and other things old people need, like a blood sugar level tester.