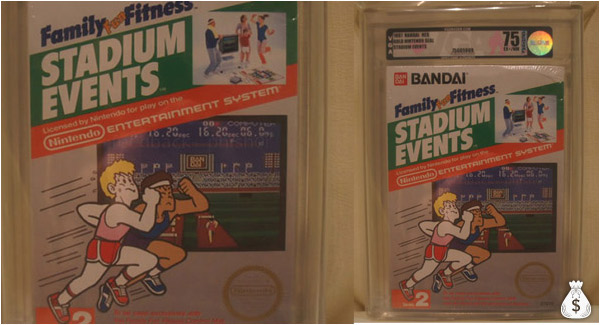 Stadium Events is the English title of the Japanese Family Computer video game Running Stadium by Bandai. The game was released for the Nintendo Entertainment System in Japan in 1986, in the United States in 1987 and in West Germany and Sweden in 1988. It was one of two games released in North America that were designed and branded for the Family Fun Fitness (FFF) mat, a short-lived running pad accessory for the NES. The other game in the Family Trainer series, Athletic World, was released earlier in the same year.

Athletic World’s label is marked with a green “Series 1”; Stadium Events has an orange “Series 2” badge. This numbering system was abandoned when Nintendo took over further Bandai releases for use with its Power Pad instead. Although there were 10 total games in the Family Trainer series, only these two games were released in North America under the Family Fun Fitness banner.

If you are interested, you can purchase the game on eBay for a cool $37,999.99. Click the photo above to see more ridiculously priced items at SillyMillions.com.