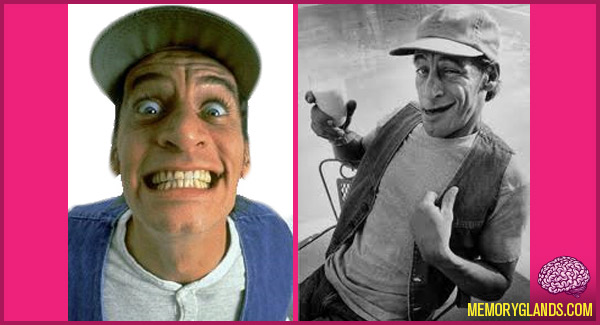 Ernest P. Worrell is a fictional character most principally portrayed by the late American actor Jim Varney in a series of television commercials, and later in a television series (Hey Vern, It’s Ernest!) as well as a series of feature films. Ernest was created by the Nashville advertising agency Carden and Cherry and was used in various local television ad campaigns.

The only national products he promoted were The Coca-Cola Company’s Sprite, TaB, and Mello Yello soda brands.The first Ernest commercial, filmed in 1980, advertised an appearance by the Dallas Cowboys Cheerleaders at Beech Bend Park, an amusement park located near Bowling Green, Kentucky. The format of the commercials seldom varied. The rubber-faced Ernest, almost always dressed in a denim vest and baseball cap, appeared at the door of an unseen and unheard but seemingly unwilling neighbor named Vern. The spots were structured in a way to allow the viewer to be “Vern”, as Varney looked directly in the camera whenever Vern was addressed. Ernest’s seemingly pointless conversations with Vern – which were actually a soliloquy due to Vern never responding – inevitably rambled around to a favorable description of the sponsor’s product, followed by his signature close, “KnowhutImean?”

While Vern is never shown to ever say anything, it is implied that he finds Ernest to be an unwelcome pest due to him trying to slam his door in Ernest’s face on a few occasions. Vern also shakes his head “No” whenever Ernest invites him to do something. Ernest, however, is oblivious to Vern’s apparent distress regarding him and always regards Vern as his closest buddy and confidant.