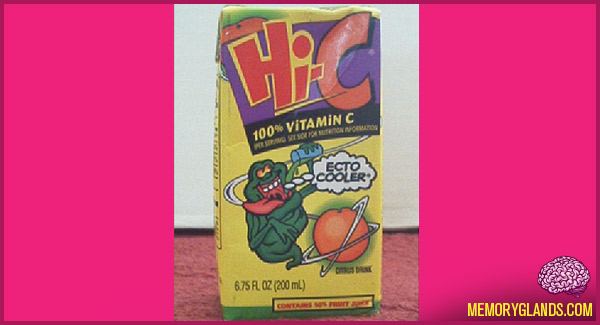 Ecto-Cooler was a product tie-in with the cartoon series The Real Ghostbusters, based on the 1984 live-action film, Ghostbusters. Hi-C struck a deal in 1987 to promote the series by developing a drink. Expected to last only as long as the series, the drink was successful beyond expectations and continued after the series’ 1991 cancellation to be produced for more than a decade. The Ecto-Cooler box featured The Real Ghostbusters character Slimer, as did the commercials. Slimer left the box sometime around 1997, but Minute Maid did not discontinue the product until 2001, at which point it was renamed Shoutin’ Orange Tangergreen. Slimer was replaced on the packaging by a similar-looking blob of lips.The product was still noted as ecto cool on many store receipts.