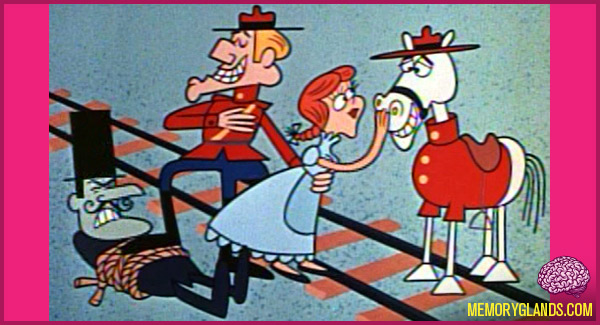 Dudley Do-Right is the eponymous hero of a segment on The Rocky and Bullwinkle Show which parodied early 20th century melodrama and silent film (by using only a piano as a musical background) in the form of the Northern genre. Dudley Do-Right was a dim-witted Canadian Mountie who was always trying to catch his nemesis Snidely Whiplash, more often succeeding by pure luck than anything else. He romantically pursued Nell Fenwick, the daughter of Inspector Fenwick, the head of the Mountie station. However, a running gag throughout the series was Nell’s interest in his horse (called Horse), to the point that she scarcely noticed Dudley’s interest.