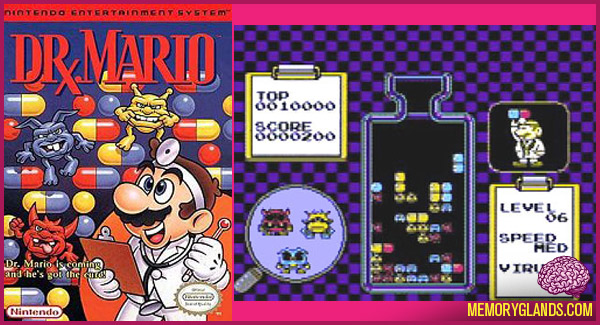 Dr. Mario is an action puzzle game designed by Gunpei Yokoi and produced by Takahiro Harada. It was developed and published by Nintendo for the Nintendo Entertainment System and Game Boy consoles, and was released in 1990 and 1991.

The game focuses on the player character Mario, who assumes the role of a doctor and is tasked with eradicating deadly viruses. In this falling block puzzle game, the player is tasked with destroying the viruses populating the on-screen playing field with the use of colored capsules that are dropped into the field. The player manipulates the capsules as they fall so that they are aligned with viruses of matching colors, which removes them from play. The player progresses through the game by eliminating all the viruses on the screen in each level.

Dr. Mario received positive reception, appearing on several “Best Nintendo Games of All Time” lists. The game was both ported and remade for many Nintendo consoles, including a re-release in 2004 on the Game Boy Advance as part of the Classic NES Series.