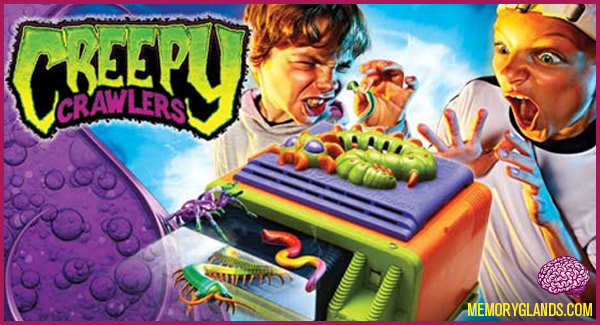 Creepy Crawlers is the best-known name associated with an activity toy made by Mattel beginning in 1964. A more generic term for the toy is “Thingmaker”.

A Thingmaker toy consists of a series of die-cast metal molds resembling various bug-like creatures, into which is poured a liquid chemical substance called Plastigoop, which comes in many colors. The mold is then heated atop an open-face electric hot plate oven. The Plastigoop is cured by the heat, and when cooled, is removed from the mold, forming solid, rubbery replicas.

The concept of the Thingmaker was actually introduced in 1963, as part of Mattel’s “Vac-U-Maker” set. This omnibus toy combined the new molds and Plastigoop technology with the existing “Vac-u-form” machine, which molded simple sculptures by heating thin sheets of plastic, then using a vacuum pump to form the softened plastic over hard plastic forms. Following this introduction period, the Thingmaker portion was spun off as a separate set, and the “Creepy Crawlers” line began in earnest.