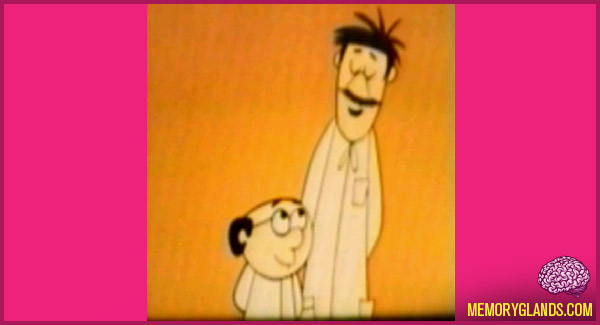 Clyde Crashcup is a fictional character from the early-1960s animated television series The Alvin Show.

Clyde Crashcup (voiced by Shepard Menken) is a scientist in a white coat whose experiments invariably failed. His was the only voice heard in many of the episodes, because the other character in the series was his assistant Leonardo, who only whispered into Clyde’s ear. In one episode, though, Clyde invented a wife (voiced by June Foray, who also portrayed Rocket J. Squirrel in Rocky and Bullwinkle, among many characters). Clyde had one of the four segments, and the Chipmunks starred in the other three (two of which were musical segments). In the episode “Crashcup Invents the Birthday Party”, Foray provided the (all too audible) voice for the mother of Crashcup’s inaudible assistant Leonardo.
Clyde Crashcup was primarily an inventor rather than a researcher, although he tended to “invent” things which had already been invented. However, in one episode, he built a functioning time machine. He typically would invent something by taking a pencil out of his lab coat’s pocket and drawing a picture in midair of his conception: the picture would then become the actual object.

Clyde’s catchphrase was to break down the name of his invention into its etonymic elements to explain his thought process. For example, when asked to justify the invention of the telephone, he would say “That’s ‘tele-‘ for tele and ‘-phone’ for phone: telephone.”