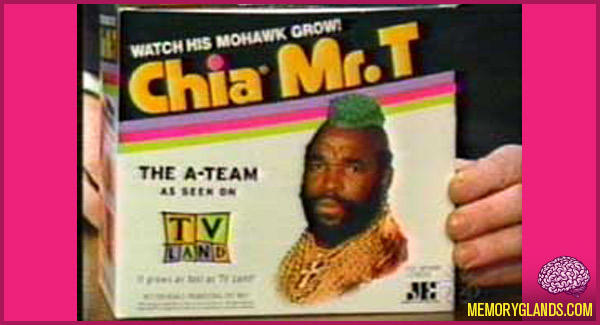 Chia Pets achieved popularity in the 1980s following the 1982 release of a ram, the first Chia Pet. The catch phrase sung in the TV commercial as the plant grows in time lapse is “Ch-ch-ch-chia!”. Moistened seeds of chia (Salvia hispanica) are applied to the grooved terra cotta figurine body.

A range of generic animals has been produced, including a turtle, pig, puppy, kitten, frog, and hippopotamus, but cartoon characters including: Garfield, Scooby-Doo, Looney Tunes, Shrek, The Simpsons, and SpongeBob have also been licensed. Additionally, there are Chia Pets depicting presidents, including Barack Obama.