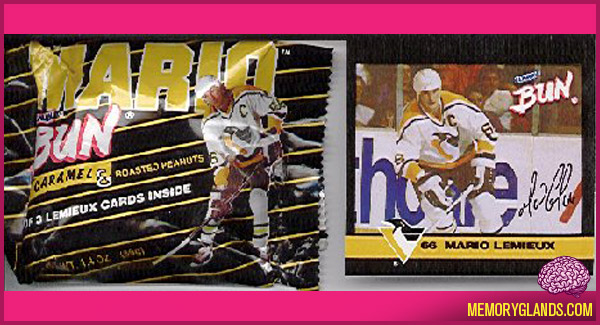 Bun Bars are a line of candy bars currently manufactured by Pearson’s Candy Company of Saint Paul, Minnesota and available in the United States. Originally created in the 1920s by the Wayne Bun Candy Company and later bought out by Clark Bar, Pearson’s picked up the brand in 1998. Pearson’s acquired Bun Bars partially due the similarities in manufacturing the Bun as compared to their own Nut Goodie. While the two products are very similar, they still have recipe and ingredient differences that make each unique.

Bun Bars have one of three flavored centers (maple, vanilla, or caramel) covered in unsalted peanuts and milk chocolate. When first bought by Pearson’s in 1998, maple and vanilla flavors were available, but later caramel was added to the line up. Despite the name, Bun Bars are not bars at all, but actually round, flat disks.

Growing up in Pittsburgh, we had Mario Bun Bars, in honor of Pittsburgh hockey great Mario Lemieux (pictured above).