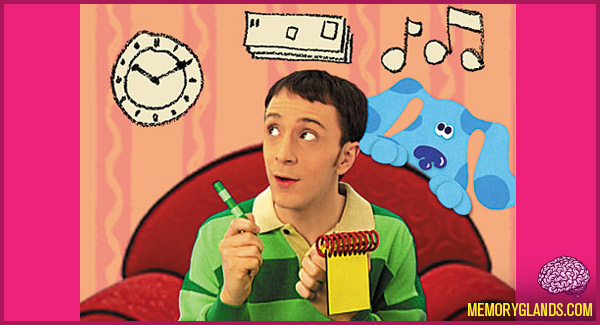 Blue’s Clues is an American children’s television show airing on the Nickelodeon family of channels. The show premiered on September 8, 1996 and it formerly aired on Nick Jr. until 2008, but continues to air today on other channels, although production of new episodes ceased by 2006. Versions of the show have been produced in other countries, most notably in the United Kingdom. It was created by a “green team” of producers, Todd Kessler, Angela C. Santomero, and Traci Paige Johnson, who used concepts learned from child development and early-childhood education research to create a television show that would capture preschool children’s attention and help them learn. They used the narrative format in their presentation of material, as opposed to the more traditional magazine format, and structured every episode the same way.

The result, Blue’s Clues, has been called “one of the most successful, critically acclaimed, and ground-breaking preschool television series of all time”. Author Malcolm Gladwell called the show “perhaps the ‘stickiest’—meaning the most irresistible and involving—television show ever”. Its innovative use of research, technology, and interactive content has influenced its genre since its debut, including the “gold standard of preschool TV programs” that inspired it, Sesame Street. It became the highest-rated show for preschoolers on commercial television, and received nine Emmy awards. Its efficacy in teaching children using the medium of television has been documented in research studies.