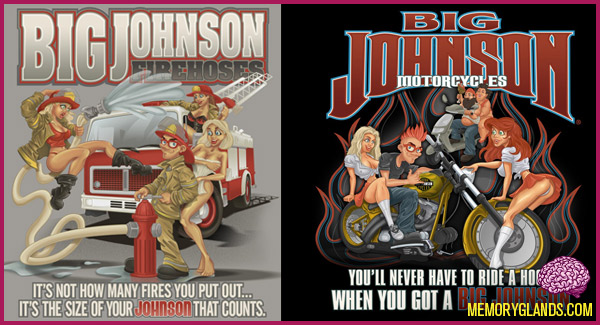 Big Johnson is a brand that is marketed by Maryland Brand Management, Inc. (MBM), known for its T-shirts featuring E. Normus Johnson depicted in comic art featuring humorous sexual innuendos. MBM is the successor company to Maryland Screen Printers Inc. (MSP) and G & C Sales, Inc. At the height of Big Johnson’s success in the 1990s, it sponsored a Big Johnson NASCAR automobile and MSP was twice listed in the Inc. list of America’s fastest growing companies. The sexual innuendo has been controversial leading to court rulings banning sales in federal buildings and corporate decisions banning wearing the shirts.

In 1995, the company’s products became part of a United States Constitution First Amendment case when a gift shop proprietor at the National Fire Academy in Emmitsburg, Maryland was forced by a U.S. District Court ruling to take sexually suggestive T-shirts and cards out of his store, which was located in a federal building. The order noted that “The sale . . . of items which denote sexually offensive and discriminatory statements, depictions or pictures is in violation of federal law and presents a hostile and sexually offensive environment”. The proprietor sought an injunction against the U.S. Fire Administration. A few months after the ruling, the case was settled with the gift shop being granted expanded space in exchange for surrendering the right to sell the offending materials. Although both Disney World and Kings Dominion, are both large customers of MBM, Big Johnson shirts are banned in their amusement parks. Big Johnson has expanded beyond E. Normus Johnson shirts with lines of shirts for firefighters, police, and bikers.