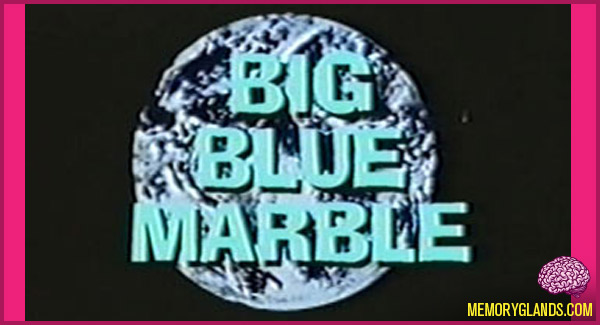 Big Blue Marble was a half-hour children’s television series that ran from 1974 to 1983 in syndication. Distinctive content included stories about children around the world and a pen-pal club that encouraged intercultural communication. The name of the show referred to the appearance of Earth as a giant marble, popularized by a famous photograph of the same name taken in December 1972 by the crew of Apollo 17.

Each episode featured a segment about the real life of a boy and a girl, one American, the other foreign. The show also had occasional stories about world ecology. In addition there was a weekly segment in which a singing globe “Bluey” invited viewers to write letters to the show, often requests for pen pals. The address to send the letters was in Santa Barbara, California. The character was voiced by executive producer, Robert Weimer.