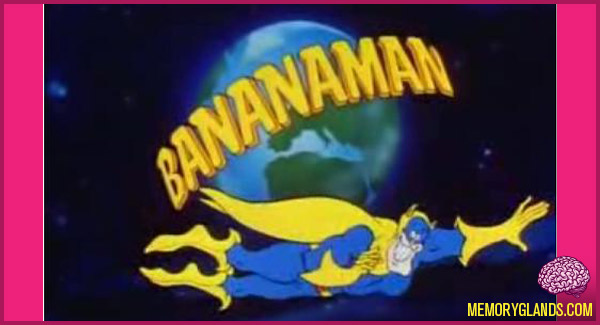 Bananaman is a British comic book fictional character. He originally appeared in Nutty as the backpage strip in Issue 1, dated 16 February 1980 drawn by John Geering.

Bananaman was aired in the United States by the Nickelodeon cable network as a companion piece to Dangermouse, but Bananaman never came close to reaching that series’ American popularity. The show also aired during the Australian Broadcasting Corporation’s (ABC) after school timeslot and is considered one of the Classic ABC shows.

Some of these episodes would eventually re-appear in print form in The Dandy in 1998, coinciding with the BBC repeating the series that year, and are now being reprinted in the comic as of April 2007, now promoting the DVD. Each episode was roughly five minutes from start to end. Phrases from the show, “twenty big men” and “ever alert for the call to action”, are still used in the comic today.